The Anterior Cruciate Ligament (ACL) is a ligament in the center of the knee that becomes damaged when twisted too far, such as in a skiing injury. ACL Reconstruction is performed using a combination of open surgery and arthroscopy.
The ACL shown in (Fig.1) is healthy and firmly attached to the femur and tibia. 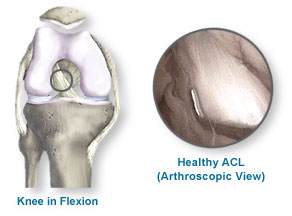 In (Fig.2), the ACL is badly torn and will need to be reconstructed

Before the ACL reconstruction process begins, your surgeon will examine your knee arthroscopically, and attend to any additional damage to the knee, such as a torn meniscus, or injured joint surface (articular cartilage). 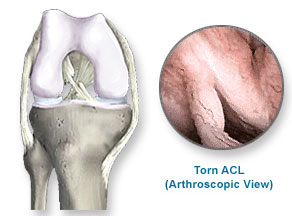 Reconstruction of the ACL, first begins with a small incision in your leg where small tunnels are drilled in the bone (Fig.3)
Next your new ACL is brought through these tunnels and then secured using various fixation devices. As healing occurs, the bone tunnels fill in to secure the tendon (Fig.4) 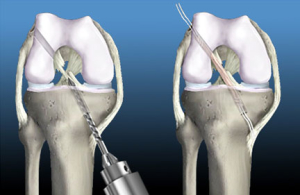 To the Right is an x-ray taken following an ACL reconstruction where 2 screws where used to fix the graft in the Femoral and Tibial tunnels.

There is more than one method of creating a replacement ACL.

The first method uses an Autograft (from your own leg) utilising the Semitendinosus-Gracilis (hamstring) tendons, which connect muscles in the back of the thigh to the leg. Two small portions of these tendons are harvested and removed through a small incision in your leg then they are used to form a strong new ACL replacement.

The second method shown in (Fig.5), uses the patellar tendon, which connects the patella to the tibia. The middle third of the tendon and a small portion of bone on either end is harvested and used as the new ACL. This is called a Bone-Patellar Tendon-Bone (B-PT-B) autograft, because your own tissue is used. 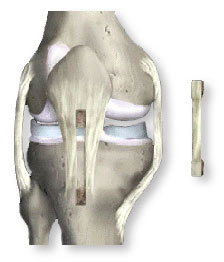 (Fig.6) shows a B-PT-Bone Autograft following preparation and just prior to insertion into the prepared tunnels

The third method of creating a replacement ACL uses an allograft, meaning the tendon comes from a source other than your own body, such as a donated Achilles tendon (Fig.7).